The role of Biofilms in chronic infections 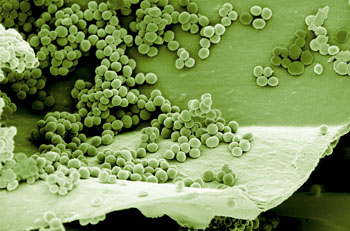 Before we go any further, you may be wondering what are biofilms and why are they implicated in chronic infections?  Keep reading!

Biofilms are formations that occur when a group of microorganisms such as bacteria, fungi, parasites and viruses attach themselves to a surface and create a colony. These biofilms form themselves into a type of ‘shield’ that has a glue-like consistency, often referred to as ‘slime’. Biofilms then act as a barrier and help the colony to defend itself against antimicrobial treatments (such as antibiotics) and our immune cells. In fact, biofilm communities can be 1000 times more resistant to antibiotics than free-floating bacteria.

Biofilms can form part of the reason that some wounds may be difficult to heal, and why persistent infections may keep recurring. However, biofilms aren’t always undesirable. They can also play home to our healthy bacteria, such as that within our digestive system and on our skin.

Where are biofilms found?

A biofilm colony secretes material that provides a structural matrix, similar to cement. These structures can adhere to surfaces such as the lining of the gastrointestinal tract (GIT), urinary tract, respiratory system, heart, mouth (including the teeth), sex organs, eyes, the middle ear and skin.

Biofilms can also form on medical materials such as catheters, joint replacements, heart valves and they commonly occur in hospital environments.

Under a biofilm, many different species of pathogens can work collaboratively together to survive anti-microbial treatment and re-emerge to create symptoms over and over again, which can contribute to a roller-coaster of symptoms that wax and wane.

One of the best examples of a commonly understood biofilm is the accumulation of plaque (or biofilm) on the teeth. Treating and breaking down plaque can sometimes be challenging. Infections can ‘hide’ in plaques well away from antiseptic treatments and the immune system, sometimes causing gingivitis (inflammation of the gums).

Another commonly known biofilm is sinusitis (sinus infection). In fact, up to 60% of people suffering with a sinus infection has a sinus bacterial biofilm. Ear infections, often found in children, have been found to be associated with the presence of middle ear biofilms.

Biofilms are good at ‘hiding’ microbes

Up to 80% of infections in the body affecting the body systems mentioned above are associated with biofilm formation. Once formed, these biofilms can make it challenging for antimicrobial treatments to penetrate the biofilm. A microbial biofilm is continuously changing, stimulating inflammation, and acting as an obstacle for the action of the immune system. These types of persistent infections may be correlated to a range of health complaints including middle ear infections, urinary tract infections (UTIs), GIT infections, fungal overgrowth and more.

The life cycle of the biofilm includes the microbes communicating via a sophisticated process called ‘quorum sensing’. Microbes send messages to each other to start the formation of the matrix (cement) of the biofilm.  The microbes then communicate with each other as to their total number, and when they distinguish that there is a large colony, they start working as a community. Once the biofilm has been formed, channels are developed to allow nutrients in to enhance the development of the colony.

There are a number of natural compounds that may help to breakdown microbial biofilms. Some can preferentially target overgrowth of ‘bad’ microbes in biofilms, while enhancing ‘good’ bacterial biofilms such as: