We live in a world that – thanks to advances in modern technology – comes with many luxuries and conveniences. But do these modern-day comforts come with a downside? What about EMF pollution?

Since the first light bulb was switched on by Thomas Edison in 1880, our planet has been bombarded by an onslaught of electromagnetic fields (EMFs). In this age of mobile phones, wireless routers, televisions, power lines, stereos and portable GPS devices, we live in a veritable “electrosmog”, and this has many of us very concerned about the impact EMFs are having on our health. Even in the early days, people noticed the biological effects of electricity, which makes sense because everything in our body works electrically – our brains, muscles and thoughts communicate electrically through our synapses and brain cells, so it’s no wonder man-made electricity interferes with our body. 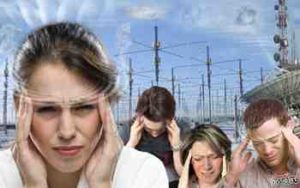 EMFs are invisible areas of energy that are produced with the use of electrical power and many believe they are significantly harmful to our health. In fact, EMF pollution has led to a condition known as electromagnetic hypersensitivity (EHS), characterised by a variety of non-specific symptoms, which afflicted individuals attribute to exposure to EMF. Symptoms of this condition include skin conditions such as redness, tingling, and burning sensations, fatigue, tiredness, concentration difficulties, dizziness, nausea, heart palpations and digestive disturbance.

Who & what does EMF pollution impact?

Several studies over the years from groups such as the Bioinitiative Working Group, International Agency for Research on Cancer (IARC) and the World Health Organisation have reported effects including:

What about the bees?

As you might be aware, there is a decline in the bee population which is concerning as over 70% of the food we eat is a result of bee pollination – if bees go then we will be next.  One of the likely reasons is the effects of mobile phone masts interrupting the bees’ magnetic navigation systems.  So it is not just humans affected by EMF pollution, it is the bees, migrating birds, fish and other wildlife being affected by EMF pollution.

As a naturopath and bioresonance practitioner, I take EMF pollution very seriously and notice many patients testing positive for EMF sensitivity, contributing to many symptoms and conditions

I have been a naturopath, nutritionist, medical herbalist and homoeopath for over 26 years, and since I have invested in quantum physics technology, I am seeing even greater success with patient outcomes as I can quickly identify measurable EMF pollution contributing to their health concerns.

Should I have testing for EMF Pollution?

Testing and treating for electromagnetic pollution is extremely relevant for many health concerns including:

We can’t control everything in life, and many won’t – or can’t – give up the luxuries and advantages of modern day which are accompanied by EMFs. So what can we do to mitigate at least some of the damaging effects?

Are you ready to regain your health?

Take a look at the books I’ve authored…

“Through Jenny’s wisdom and knowledge we discovered the benefit of a change in diet to promote egg quality. After putting Jenny’s advice into action we were delighted during the next IVF cycle to obtain a high number of quality eggs which fertilized. As I enter this testimony I eagerly await the arrival of our first bundle of joy!” – Mrs LB Martin., Townsville QLD Australia – 13th June 2015

Join me on social media

I’ll send you fortnightly wellness tips, discuss specific health concerns and share my favourite healthy recipes to help you achieve and maintain optimal wellness. Also get access to the bonus ‘Easy to follow 7 day detox guide to support gut health and vitality’.
You can change your mind at any time by clicking the unsubscribe link in the footer of any email you receive from us, or by contacting us. We will treat your information with respect. View our Privacy Policy for more information. By clicking below, you agree that we may process your information in accordance with these terms. We use MailChimp as our marketing automation platform. By clicking below to submit this form, you acknowledge that the information you provide will be transferred to MailChimp for processing in accordance with their Privacy Policy and Terms
MENU
We use cookies to ensure that we give you the best experience on our website. If you continue to use this site we will assume that you are happy with it.I agreeRead more